With the complexity of the terrain style roof and working with traditional methods of construction such as double brick walls and a concrete roof, new and ingenious solutions were required by Tony Hollingsworth at" Omega Construction. " 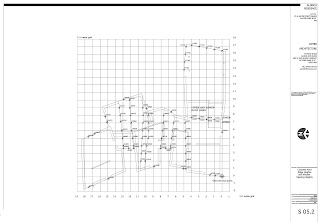 Tonys crew set the roof terrain up by calculating the perimeter heights of the walls and these were first built in Brick.

Then EnterArchitecture provided a 1x1 m grid over the whole site to indicate where the scaffolding props would be placed...over 800 of them were used.


A series of drawings were made by Henry Berresford to notate each height point on the Grid.
While this was time consuming, it ensured the accuracy of the final roof forms.. Any concrete roof is only as good as the formwork and preparation is the key. So now a complicated roof was turning into a logical step by step process. 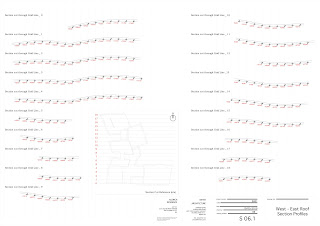 Posted by Enter Projects at 7:44 PM No comments:

Posted by Enter Projects at 7:36 PM No comments:

Construction continues in Perth for the Aldrich residence. The walls are a double leaf skin , photographs by David Simmonds.........photographed in Perth in April

http://simmonds.com.au/Gallery_EnterWA/
Posted by Enter Projects at 7:30 PM No comments: